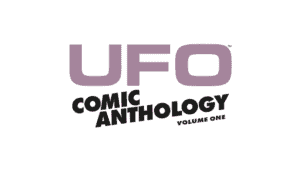 Couldn’t be more excited to share the news that the Anderson store has commissioned and about to publish a top quality, litho printed book containing a huge number of the UFO comic strips. It’s available to pre-order now, and should ship at the beginning of December.

The UFO Comic Anthology Collection is another unique and thrilling limited edition book available from the Official Gerry Anderson Store. This is the first of two volumes.

UFO, based on the classic television series, was a pioneering comic strip of the 1970s. Relive each powerful adventure and discover the backstory behind its creation – and beyond – with supporting features in the first of two anthologies, never before reprinted or collected.

Anthology of UFO Comics Volume One is the first of two volumes that collects all of Countdown and TV Action’s UFO comic strips. Volume One has 288 pages of colour and black-and-white Countdown comics, as well as articles and interviews with Anderson comics expert Shaqui Le Vesconte, providing context and unique insights on Countdown’s history, creators, and UFO’s comics life.

Welcome to the UFO Comic Strips Website. These comic strips have kindly been uploaded to the SHADO Facebook Group by…